Bangkok's Chinatown is the biggest in the world, and I got lost in it - on purpose! Which is super fun until you have to pee.

After the gem section, I asked a couple people on the street if there was a toilet anywhere, and they pointed me to the temple.

I asked a younger monk if there was a bathroom, which is probably not something you should ask a monk, and he pointed in a random direction and said, "ten minutes." So, I continued my search.


After a good hour of random wandering in Bangkok's oven with no bathroom finding success, I became a bit desperate, and it must have shown. A lady, cooking lunch in front of her shop/house, called over her daughter, who spoke English, who asked me what I needed, and then let me use their private washroom. She gave me a coke and we talked about the neighbourhood and how a lot of the old buildings have been torn down. Then she showed me where I was and where to go, I finished my coke, and she bid me adieu. 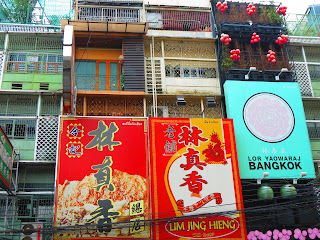 I've discovered that when I need help - a bathroom, directions, an escort home, my picture taken in front of a monument, a smile after a bout of sunstroke - I always find it, usually in the form of helpful women on scooters and German couples offering to photograph me. This more than makes up for the dodgy effing Tuk Tuk and taxi drivers. Ahem. Anyway, continuing with my day...

I decided to eat lunch at a vegan restaurant which is currently rated #1 in Bangkok on tripadvisor. It was just meh - I had a terriyaki vegan burger (I'd wanted the Japanese curry, but they were out). The sandwich was a bit greasy. But, I did get to explore a neighbourhood I probably wouldn't have seen otherwise. 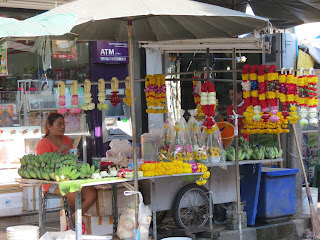 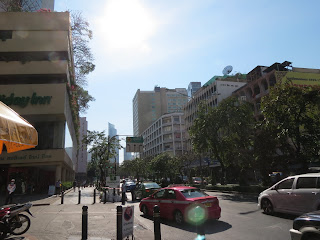 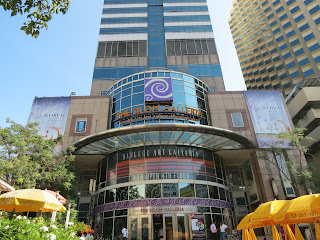 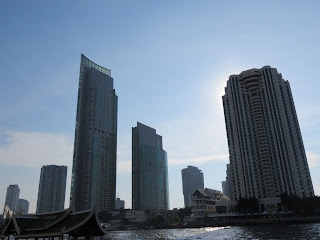 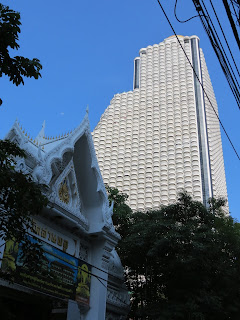 After two days in Bangkok, I needed to get out. So on Friday I headed to Ayutthaya, a world heritage site featuring ruins. Ayutthaya was the largest centre in SE Asia until 1767 when the Burmese sacked the city.

I trained it there, rented a bicycle, and sweated out most of my fluids for a good half day of historical fun. Being a huge nerd, I did the audio tour ( I was the only one), which was full of great facts, most of which I don't remember because of sunstroke, but which fascinated me at the time. 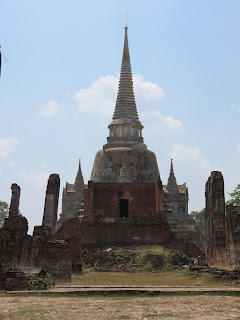 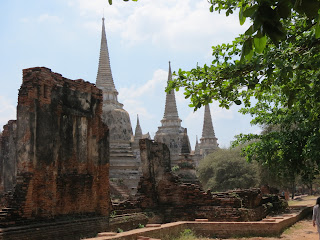 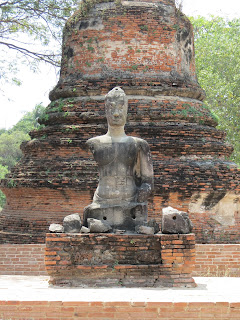 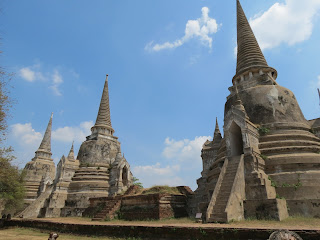 I had to be pretty economical with my time - the historical park is pretty big. Quick, on to Wat Mahathat! 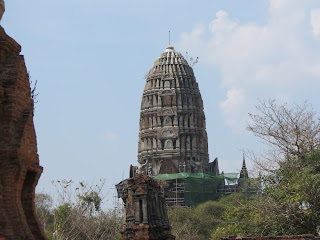 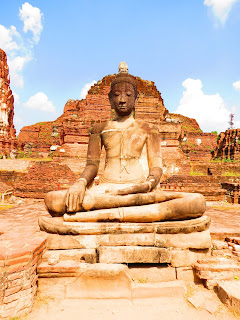 After temple #2, I decided to be ambitious and bike off the island to another temple!


I asked a number of innocent Thai people on the street if they could find my location on the map (written in both Thai and English, I should add). And...no one could. I imagine I might have frightened a few of them -pushing my map at them while sweating profusely and grimacing. Sorry, nice Thai people.

Returning to Bangkok, I wanted nothing to do with heat or sweating or sightseeing. So, Saturday I went shopping. There are no pictures. I am a focused shopper. I will say this: go to Siam Square for clothes if you like vintage/hipster/new designer wear. Avoid MBK unless you want a headache, tourist fatigue, or cheap electronics. Siam Centre is super if you have cash. Siam Paragon is great if you want a Lamborghini.

I'm not in Bangkok anymore. I spent yesterday in Petchaburi having a wonderful time on a bicycle and at a temple fair. Now I'm by the sea. I'm here to do nothing but rest (although there is a temple on a big hill...maybe) before heading back to Bangkok in a couple days, when I will conquer Chatuchak market. And then, home.

I leave you with pictures of Bangkok at night, from the 53 bus. That's right, tuk tuk drivers, I don't need you! 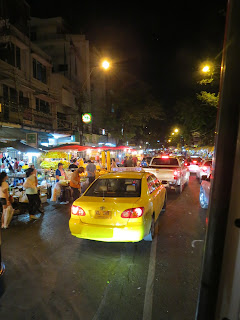 I am in fact thankful to the holder of this site who has shared this impressive article at here.

Pretty part of content. I just stumbled upon your blog and in accession capital to claim that I acquire in fact loved account your weblog posts. Anyway I will be subscribing for your feeds and even I success you get entry to persistently fast.

Terrific work! This is the kind of information that are supposed to be shared around the internet. Disgrace on Google for no longer positioning this post upper! Come on over and consult with my web site . Thanks =)

The post is very amazing around the world many people want to read this type of post.